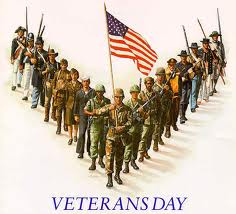 I’m interrupting Wine Friday to talk about Veteran’s Day.  I don’t see how one day among the rest of the year can possibly be adequate in honoring our veterans of all the wars since the end of The Great War, but I am grateful that our government chose to so honor them.

Veteran’s Day began as Armistice Day, the 11th hour of the 11th day of the 11th month in 1918, when a cease-fire went into effect; the beginning of the end of the Great War.  In 1919, the first recognition of Armistice Day was held; but not until 1938 was Armistice Day declared a legal holiday. In Emporia, Kansas, a man named Stephan Riod, working with veterans from the Korean War, actively campaigned to change Armistice Day to honor ALL veterans; and in 1954, after many veteran’s groups applied pressure, the day was renamed Veteran’s Day. Joseph Ambrose, a then-86-year-old World War I veteran, attends the dedication day parade for the Vietnam Veterans Memorial in 1982, holding the flag that covered the casket of his son, who was killed in that war.

In the early 70’s, the holiday was wrapped up in The Uniform Holiday Bill, a proposal to celebrate Washington’s birthday, Memorial Day, Columbus Day and Veteran’s Day on a national basis on Mondays, thus giving the American Worker a three day holiday. Vigorous campaigning saw Veteran’s Day return to the proper 11th day of the 11th month, but not until 1978.

My father fought in Korea – and he never talks about it. My cousin Mike went to West Point Military Academy, was in the military for 10 years, and went into the Reserves when he went to work for IBM. He was involved in Desert Storm. My Uncle Kenny was a POW – captured by the Japanese on Wake Island, and imprisoned for 5 years. The happiest day of my Grandmother’s life was when she got to hug him again, thin and changed though he was. My Uncle Lyn (Aunt Janie’s husband, my dad’s and Kenny’s sister, and Mike’s dad) was also in WW2, but he came through relatively unscathed. I come from a family of proud veterans. My husband does, too – his brother fought in Vietnam, and has terrible PTSD that he is just now, slowly, beginning to come to terms with. Their dad was also in Korea. Their grandfather took part in WW1. War tears families apart, and even when the servicemen and women return home, often they are never the same again. They deserve all our respect, every day of the year.

Oh yeah, something else is happening this 11-11-11. Many people are choosing to get married on this “magical” day; or to have their c-section babies this day. Whatever floats your boat, man. A quick scan of the internet shows more than one site declaring it to be “just a fancy number” while another site declared it the “Sun God” number; and still others warn that it’s bad luck. I guess it’s all in your perspective and in your belief system. So all you wonderful people getting married and having babies, good luck to you! Work hard at your relationships; that more than anything will “bless” your future.

Whether you get married, engaged, become pregnant, have a baby, buy stock, sell stock, have good or bad luck this 11-11-11, please do one important thing.  Remember a veteran. Thank a veteran. Say a prayer, light a candle, be thankful that someone out there is fighting for our country (because I sure as heck wasn’t willing to do so, when I was able – were you?).

My dad, Chet Cunningham, wrote a book about Wake Island, mainly to include his brother’s reminiscenses of that time. You can find it on Amazon – it’s called Hell Wouldn’t Stop , an Oral History of Wake Island by the soldiers who lived through it.

To all the veterans out there – I give you hugs, and smiles, and a boat-load of respect. Thank You.