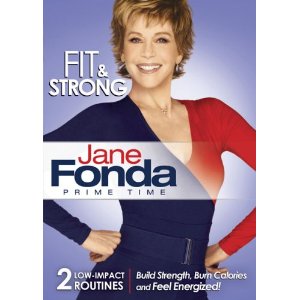 Yay! The bone doc showed me the white line across my fibula – the bone is healed! So after a five month relationship, I’ve said my goodbyes to the ortho office, and hello to my new best friend, Jane Fonda.

Some of us remember the 1980s, when she spearheaded the in-home aerobics fitness craze with VHS tapes of exercise classes. I confess, I didn’t buy any then because I had a gym through my place of work that I didn’t have to pay for, which included aerobics classes. (I took my first real aerobics class after a couple cocktails…but that’s another post.) So the hubby and I were in some fitness store or other  – he was looking for tennis tape to wrap his juggling pins with – and I stumbled upon this DVD by Jane called  “Fit and Strong”. It  came out in 2010; Jane was in her early 70s when she made it.  I LOVE this video. It uses a chair, and easy weights, and a towel; it takes 20 minutes to do. It will make me strong enough (and already has in some ways) so that I can get back to more vigorous exercises, once I can do these without being sore the next day. So I guess it’s an old-person’s exercise program. No, wait – it’s an out-of-shape, creaky-person’s exercise program! Because there’s no way that I’m old. (LOOK at that photo! Doesn’t she look fabulous?!!)

Jane is extremely appealing in the video. She’s someone I would love to sit and have a cup of coffee with – or three or four. Someone I’d love to chat with. As it is, I pant and balance and grin along with her as she talks about getting strong in your seventies, and how she has a titanium and plastic knee and a titanium and ceramic hip. Jane is my new best friend. She’s going to help me get back to ME again.

Which will be good, as I deal with the Thanksgiving Leftovers.  (This year, since we went down to my nephew’s home for the Holiday, I only made a turkey for the leftovers!!!) I usually make turkey stock with the carcass and skin, an onion cut in half, two carrots and two celery sticks and a whole bunch o’ water in a big soup pot, oh and a couple tablespoons of white vinegar to help leach out the marrow from the bones. Boil the hell out of the whole mess over two or three days, skimming as you go,  until the liquid is reduced by about half. Then strain the whole thing, toss out the skin/bones/vegetables, strain again – and you’ve got healthy, fresh stock, which can be used in a million different ways.

The meat gets one of two different treatments (not, obviously, counting turkey sandwiches – that’s a whole ‘nother post!). When I gave the boys in my family a choice between yummy turkey enchiladas and turkey pot pie, my two sons both chose pot pie while my husband just grinned and nodded for both choices. This time around, though, I believe I have enough turkey meat to handle the pot pie AND the enchiladas, so that’s kind of exciting.

TURKEY ENCHILADAS based on a recipe by Ron Stell (I don’t have the recipe in front of me, so…) These are NOT your red-sauce enchiladas!

Directions: Preheat oven to 325 f.  In a 9×12 pan, spray with cooking spray; set aside. In a large bowl, add cream of chicken soup, green chilis, sour cream, 8 ounces of the pepper jack, the stock, and the green onions; mix well to combine. SET ASIDE 1/3 OF THIS MIXTURE FOR THE TOP. (Can you tell I always forget this part?)  Add the chopped chicken/turkey to the mixture.

Take a tortilla, put a couple tablespoons of filling in, and roll up. Place in prepared pan. This will make about 10 enchiladas, unless you’re generous, in which you’ll make 8. Once all the tortillas are nestled in the pan, spread the reserved sauce over the top and sprinkle with the reserved cheese. Bake at 325 for 20 – 30 minutes, or until bubbly and just turning light brown.

This recipe doubles or even triples easily, so you can feed a crowd. It also freezes beautifully (especially if you have a freezer big enough to accommodate the pan). If you want to spice it up, feel free; but my Ohio boy likes the spice kick in this just fine.

Use whatever crust recipe that you have that you love. Or buy those lovely pre-made pie

crusts in a box.  For a real easy pot pie topper, use a sheet of puff pastry – and forego the bottom crust (which I do all the time). For this recipe, we’re using the puff pastry.

Directions: Preheat oven to 325 f.  Heat a saute pan over medium heat; add olive oil. When oil is hot, add in onions, carrots, parsnip, and celery; saute until softened. Sprinkle with a bit of dried thyme about half way through. Once the vegetables are done, add in the green peas and one tablespoon of the sherry. Saute until the liquid is gone, remove from heat and add the turkey to the vegetables; mix well.

To make the sauce: in a medium saucepan, heat the butter until melted but not burning. Add in the flour to make a roux; stir until the mixture has a golden color, then add the one cup chicken stock, stirring rapidly until combined. Add in the milk and stir until thickened. Taste the sauce; add up to one teaspoon each of salt and pepper. Add in one to two tablespoons sherry to the sauce; feel free to sprinkle some more thyme. Once you are satisfied at the taste, mix the sauce in with the turkey and vegetables. Pour into a deep dish pie plate. If you only have a shallow pie plate, keep the rest for a yummy open turkey melt sandwich.

Put in oven.  Bake 20-30 minutes, or until the pastry becomes puffed and golden. Let sit for 5 to 10 minutes to cool before serving.

Well, there you go – my tried-and-true answer to turkey leftovers. (It works GREAT with a pre-cooked chicken, too!) I don’t do the candied yams; this year, I didn’t make cranberry sauce, as I’m usually the only one who eats it. I’ll probably do a quick casserole with leftover stuffing, chopped turkey, and leftover gravy all mixed together and topped with biscuits (an easier pot pie, I guess…). If I have any turkey left over, that is!

As always, sending lots of love from my kitchen to yours. Now…who wants to go for a nice slow jog around the block?

Thanks for joining me – and remember, drink responsibly! 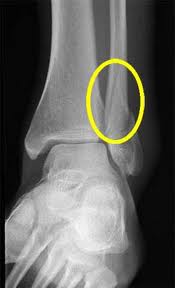