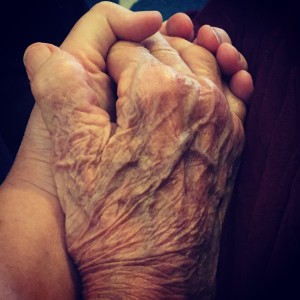 by Christine | Back to the Barre, Observations

But now I do, and I am partly putting the responsibility for it on my sedentary work writing, and sedentary Day Job, and partly on menopause.

Menopause happens for a reason. Women’s bodies stop preparing for pregnancy (thank goodness!). But with that, comes a loss of hormones. Our bodies gain weight in weird and unpredictable spurts even when we’re doing everything “right” in order to protect us while we go through this transition.

When you add stress to that situation, which includes everything from aging parents, adult children who will not leave home, death or divorce of a spouse/parent/child/other loved one, job issues, and so on, the normally sane woman can easily find herself munching on anything she can find in the middle of the night, as well as downing a bottle of wine. Or two. Depending on the circumstances and the  loving family around her.

So here I am, post-total abdominal hysterectomy (August 2012), post-hormones (because they went up to $100 a month and nobody got time for that), post-emotional growth spurt last year…without the benefit of a gym membership – and here I am, once again. Staring at myself in the mirror, and thinking, oh hell. I am so out of shape. Not only that, but my balance is beginning to erode again. Sigh.

Is there vanity involved? Hell yes. I have great feet and great legs, and I’d like to look respectable in clothes that will show them off. Which means I need to get back into the gym and start walking on the treadmill (did you know that CARDIO exercise can help keep you mentally sharp? Go here to check it out). I would also like to be able to take walks with my husband without getting dizzy and having to hang onto him.

It also means that I need to get back to ballet. Simple barre exercises, stretching, balancing exercises, eventually the joy of moving a bit across a wooden floor, even if it’s in socks and yoga pants and a big, enveloping t-shirt.

My first day back to the Barre was on Friday evening. I was fine until I attempted grand plies. I have decided that at my age, I no longer need to do grand plies. I am hoping my right quadricep will forgive me soon, and we can continue this odyssey.

(And when I’m not at the gym, I’ll be doing yoga in my front room.)

So, yes. There’s vanity involved. But I also want to be healthy for as long as I possibly can. My father is 87; he has a bad shoulder and a bad ankle. His hands are twisted with arthritis, and he hurts every single day. But he’s walking, his mind is clear, and his arms are strong enough to give me hugs when I see him.

I want to be like my dad, only stronger. And without the pain. I think it’s a worthy goal.

Episode 1: Does My Uterus Make Me Look Fat?

I had an illuminating gynecology visit last week. I had to go, because I had originally gone to my GP for blood in my stool; he examined me and said he thought I had fibroids in my uterus. I had a CT scan, which confirmed a diagnosis of “an enlarged myomatous uterus”. My bowel, as well as all my other organs, were peachy fine. The GP set me up with a Gynocologist and a Gastro-intestine doc, just to be on the safe side.

This post is about the Gyno visit, and the state of my uterus. (I’m thinking at this point the GI post will be positively tame. Tame, I tell you!)

So, I met this nice doc, probably in her mid to late 30’s. We talked for almost twenty, maybe thirty minutes. After she went through my symptoms (I’ll spare you the details), I then complained that for the past three or four years, when I turn sideways, I am not thin. I’ve always – always been thin sideways, and not so much straight on.

But I’m not thin anymore when I turn sideways. I’ve gained weight, but it’s out of proportion to how I’ve been eating. Even with The Menopause hovering on my personal horizon, there is no real reason for the weight gain.

Plus, my energy is low. I wake up a lot at night, I have to pee ALL THE TIME, and I get indigestion – something I never have had, with the exception of the two times I’ve been pregnant.

Pregnant. That’s it. I feel – pregnant.  But ugly-pregnant, not glowy-pregnant. I feel as though my bladder is being pressed on constantly. I often have a bit of difficulty breathing, and I’ll get odd aches and pains in my abdomen. Fibroids in the uterus. So technically I am pregnant, but with fibroids. Swell.

Plus, my periods. (Okay, I’m not sparing you the details.) The first couple of days, it’s like Niagra Falls. Every hour on the hour I need to change my extra-super-duper tampon. At night I have to wear a huge overnight pad along with my extra-super-duper tampon. And even then, there are mornings where I’ll wake up and find I’ve bled all over the sheets. Yeah – that makes a woman feel sexy.

My doctor was FABULOUS. Prior to the physical exam, she told me there are options – drug-wise, I can go on a drug that is fairly new here in the States and kind of expensive, but I would take it just for the two or three really heavy days of my period, 3 times a day, to cut the blood flow in half.

Or, I could go on the Pill, which would also lessen the blood flow, but with hormones involved, I’d have to go off them on a yearly basis for a few months in order to see where I am – because there is no indication of WHEN I’ll actually go into full-blown Menopause. It could be four months, or four years. There’s just no telling, and since I don’t have sisters…no help there.

Surgically, there’s an ablation that could be done (I think it’s called a hysteroscopy – where they go in vaginally). They can remove the fibroids via a laparoscopy, too – through a small incision near the belly button. Or they can go into my uterus through the veins in my groin to cauterize the blood vessels that are feeding the fibroids, which would at least cut off their blood supply. And the fourth option, of course, is a hysterectomy.

She then proceeded to the physical exam. And the minute she put her hand on my abdomen, she said “oh wow.” Um, okay.

Apparently the reason I am wide when I turn sideways is because my uterus is huge. Or, as she put it, if I had come in to see her and I was 25 instead of 52, she’d ask me if I were pregnant. Because to her, my body feels about 5 months pregnant. Let me repeat that. FIVE. MONTHS. PREGNANT.

Yeah. Knew it. Okay, but there’s a bright spot – it’s not FAT! It’s my fibroid-filled uterus making me look big. That’s a plus, right? Right? Sigh.

So, the surgical options have narrowed because my uterus is so damned HUGE. (She didn’t even see the need to do a vaginal ultrasound – she could FEEL it. And then, suddenly, so could I.)

Surgically, I could go with the cauterizing of the blood vessels in my uterus to cut off the fibroids. But this will not get rid of the fibroids – it will merely stop them from growing (which would be, I’ll admit, a total blessing).

OR: I could go with the hysterectomy (with a low bikini incision). My ovaries would be left in, because I don’t have any family history of cancer at all and, according to the doc, our ovaries have an important role to play as we age. They don’t know what it is, exactly, but it’s important.

This last option would give me my figure back (such as it is). The medication options will help with the blood flow, but it won’t shrink the fibroids into non-existence, from what I understand. (Even after menopause, the fibroids don’t just go away, and I’ll be my normal, slightly fist-sized uterus girl again. Oh, no. That, of course, would be too easy.)

When I told my husband, the first thing I did was help him feel my abdomen. Almost from hipbone to hipbone, from pubic bone to just below my belly button – my uterus fills my abdomen.  Considering it’s supposed to be roughly the size of my fist, it’s beyond ginormous. I feel awkward, ugly, huge and impossible.

Tom, my love, wants me to do whatever will give me the best long-term health outcome. He doesn’t care if I don’t get my figure back. (I think a main part of it is he doesn’t want me going in for any surgery, at all. I can totally understand that.) But me? I’m tired of feeling huge. Of being 5 months pregnant. I’ve been this way, steadily growing, for four years now. And I’m tired.

I don’t know what I’ll end up doing. I’ve got research to do. The doc took a biopsy of the fibroids and we should get the results back in a few days. Then we’ll sit down, the three of us, and figure out what our next step should be.

Why am I writing about this here? Because it didn’t dawn on me that when a GP doc gave me an exam in 2010, that she might be wrong when she pressed on my uterus and said, “What’s your bladder doing there?” I’ll never know how different things might have been, if this had been caught in 2010.

Things change in our bodies as we women age, and we need to be alert to the changes. The Niagra Falls part of my period didn’t really get bad until about 3-4 years ago. That should have been my first clue. But I wasn’t paying any attention. I had assumed that everything was as it should be.

I was wrong. Learn from my mistakes. Pay attention to your health. It’s important, and no one else can possibly do it for you.

Thanks for stopping by! I love your opinions. If you’ve got (or had) a uterus, talk to me – what do you think about this? And if you’re a guy, what do YOU think?