A Bit of Rain

Last weekend it rained in So Cal. Mind you, it hasn’t rained here – like that – in months upon months of months. A long time.

During a break in the rain, I took a walk with my camera and caught some lovely photos.  Enjoy… The sky, with a bit more rain in the clouds.

It’s been a long time since I’ve seen the sky with rain-fattened clouds. Cactus do some amazing things right after a rain.

Just when you think this cactus, above, is totally dead, it comes back to vivid life. This arroyo runs through the local golf course near my house. This is the first time I’ve seen so much water in it since the late 1990’s. Another shot of the sky.

This shot, above, had the ubiquitous So Cal palm tree, so I had to take it. So, yeah. Like many So Cal homes, ours doesn’t have gutters. Someday we’ll get there – but for now, we collect water in used laundry detergent buckets. Both in the front and the back yards. It’s one way to keep the yards from flooding…

Many of my other photos are on my laptop, which is busy being backed up by Carbonite and, so, extremely slow when it comes to photos. I hope you enjoy!

I’m working on bringing Wine Fridays back, so stay tuned. Here’s hoping you have a happy weekend! 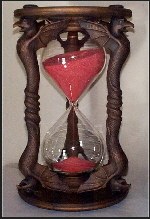 Thanks to David Hood for the photo - http://www.hourglasses.com/

I will not lie. I LOVE the time changes. I hope the government never gets rid of “Spring ahead, fall back”.  There is something so urgent and hopeful about spring, moving the clock ahead, seeing daylight after getting home from the day job. Having the soft spring light in the early evening to wander in the garden, or to plant, weed, hover, dream in the half-light that happens (for me) between getting home from work and having to start dinner.

In fall, it’s even better. By November I’m tired of the heat, the unrelenting sun, the dry winds. Give me rains, and chilly weather. Give me a reason to wear sweaters here in southern California. I’m ready for it to be light at 5am. Let me enjoy the rare night fire, the family gathered around, mulled wine and hot cider available for everyone. (Trader Joe’s has a WONDERFUL spiced apple cider that is FABULOUS when heated.)

This year, I was doubly blessed on the night of the time change. Hubby and I went to an L.A. Kings game last night (hockey – we lost to the Penguins, waddle waddle) and due to overtime and a shootout, plus some nasty traffic on the 5 northbound (a big truck overturned and leaking oil/fuel/something flammable anyway, closed ALL lanes), we didn’t get home until 12:30am. Hubby had to leave home again at 4am, due to working on a USC grad student’s film in the Angeles Forest.

Luckily, because of the day, we just set the clock back. Which gave us time – him to figure out where he was going and to play his new Taylor GS Mini (which he ADORES), and me to make a quick breakfast for him to eat on the road (peanut butter and honey sandwich, apple, banana, and two tangerines). An hour (and a couple glasses of wine – oh, and some fresh popcorn) later, we were in bed. I think I was asleep before my head hit the pillow.

When I woke, Hubby was long gone. I looked outside – it had rained in the night. The clouds were still thick in the sky – I went back to bed for another hour, because I could. For me, “winter” had arrived. It stayed in the 50’s at my house today; the sky was dark by 5pm. Tomorrow morning, when I leave for work, I’ll have to re-learn how to drive when the sun is barely on the horizon and then SLAMS me in the face unexpectedly. When I come home, I’ll have to deal with driving in thick traffic at night along with everyone else, who has forgotten how. In a month, we’ll all have adjusted.

But my day today was an enchanted one, filled with the dripping eaves and a rainbow, the scent of fresh rain and rosemary and a woodfire in someone else’s hearth. It was a day for dawdling and indulging. I dawdled over the newspaper, reading every section of the Los Angeles Times (thin though it is nowadays). I made breakfast for my even later-rising son. I indulged in watching a video, and then did some writing/editing. I made plans for dinner, thanks to romance writer Christina Dodd’s post about macaroni and cheese.  I took my son driving, and then went on a long walk (and I even did some very slow jogging – the legbone is feeling strong now).

The hubby came home, having spent the day being snowed on, rained on, sleeted on, then

more snow, all while they were filming. He had a big grin on his face though, and the merrily crackling fire in the fireplace just about made his night. Until I handed him some hot spiced wine. Then he fell in love with me all over again.

So, yes, I LOVE the time change. Yes my body takes awhile to adjust – it’s not even nine pm where I am and I was ready for sleep 30 minutes ago. But you know what? I don’t care. It’s a definite shift of the seasons for me, and in a world of perpetual sunshine, the fall’s “fall back” is a lovely signpost to slow down. A breather, if you will, between school starting, and the full swing of the holiday season.

My first novel, Demon Soul, is available for the Kindle and the Nook! It makes GREAT Holiday gifts!!! *hint hint* lol!