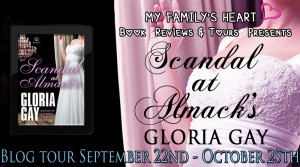 Today I have Gloria Gay on Writer Wednesday, with an interview and a bit about Scandal At Almack’s, her latest release with Boroughs Publishing Group. Sit back and sip some coffee with us! CA: First off – what can I get you? Coffee, soda, beer, wine, or a mixed cocktail?

GG: Coffee would be fine, thanks.

CA: There you go. Now, let’s chat. What drew you to writing?

GG: I knew that someday I would write a book because I loved to read so much. In high school I read a lot of the classics. But books like Tess of the D’Urberville’s were romantic but most of them ended in tragedy. I wanted books with happy endings. Then one day I discovered by chance a gothic novel. I read hundreds of books by Victoria Holt, Mary Stewart, Phyllis Whitney, etc. My husband encouraged me a lot and he bought me a typewriter for my birthday. I wrote gothic romances first but the gothics of the day had very little romance in them, it was more the mystery that was emphasized.

CA: I remember those books. They got me hooked on mysteries. So, what genre do you write in, and why? Do you write gothics, since you loved them so much?

GG:  No, surprisingly. After going through all the gothics, I discovered Regency romances and that is the genre I love to write, although I’m also branching out into romantic suspense. Hopefully I will be doing both.

CA: How did you start this particular book – with a title first, a character first, or a situation first?

GG:  Scandal at Almack’s is a book that had always been at the back of my mind as I wrote and published my other Regency romances. I wanted to write about a scandal that happened in Almack’s, a place where girls could not even dance the waltz without permission by one of the patronesses that signed the coveted vouchers without which they could not enter the place.

I knew that it was during the waltz itself that my scandal would occur, but what would occur? For a long time I just let it percolate in my mind. Then one day as I was watching television, my mind elsewhere, the thing that happened at Almack’s to my heroine, the scandal itself, popped into my mind.

My heroine, feisty, funny and pretty is someone you would want as a friend. She began to form in my mind and it was her character itself that led to the incident that happened. That happens a lot to writers, you know, problems with your books solve themselves if you just let them. I knew then what my hero would do that would cause my heroine to faint!

GG: I’m retired. I dedicate my time to writing and painting, because I’m also an artist.

CA: My hubby’s an artist. How wonderfully creative you are. Okay, so, name three things your fans would be surprised to learn about you.

GG:   a) I write poetry, too, and lately, mostly about the sea. It’s incredible but I start to walk and the feel of the sand under my feet, the lovely sky above and the sound of the sea starts my mind going toward a poem.

b) I love cats but don’t have one. My husband and I feed a stray cat that will eat the food that we set out for it in the porch but won’t come near us. He’s very shy. But we feel good feeding it. He comes twice a day for his food and the rest of the time he wanders around back yards. We named him “Boots”. He’s grey with white on its paws the length of boots.

c) I firmly believe there is a writer inside every person.

CA: Very cool. Where would you live, if you could live anywhere in the world?

GG:  I live in San Diego, California, where I have lived most of my life, and I can’t imagine anywhere else where I would rather be. It’s beautiful.

CA: Okay, now I’m jealous. I was born in San Diego and would love to move back. Maybe some day! Now, name three simple joys in your life.

GG:  My husband, children and grandchildren are my three joys other than my writing and painting.

CA: Wow! Not what I would call simple though – all three are bound to be complicated in some way, don’t you think? Still – lovely sentiment.  Onward! If you could have dinner with any person, living or dead or fictional, who would it be and where would you go to eat?

GG:  I would love to have dinner with Van Gogh. We would go to a French café in the Champs Elise and I would ask him about this or that painting that I love and how he got the idea to paint it. It would be thrilling beyond belief.

CA: Oh yes. Van Gogh would be a wonderful person to have dinner with! Now, if you could give just one piece of advice to a writer just starting out, what would it be?

GG: My piece of advice to a writer starting out is to join their local chapter of Romance Writers of America as soon as their legs can take them. Had I done that from the beginning, I would have saved myself a lot of strife and would have published sooner.

CA: I love my local RWA chapters, so I have to agree with you on this. Is there anything else you’d like to talk about?

GG:  I think RWA writers are some of the most generous people in the world. They go out of their way to help other writers, especially those starting out, and I feel proud and happy to belong to such a group.

CA: Agreed! Thanks so much for dropping by, Gloria – it was great getting to know you.

Folks, here’s the cover, and a blurb…check it out! Lord Corville was surprised that Lady Jersey had led him directly into a vision of lovely youth. Usually wallflower duty was how it sounded, giving an opportunity to dance a few sets to girls who were in their first season and not likely to obtain dancing partners on their own because they lacked pedigree or were pretty enough but lacked an attractive dowry. The Almack’s patronesses took their duty to young girls in their first or second season very seriously, and in every ball the two in charge could be seen walking about, matching young ladies to reluctant young men.

Sebastian seldom if ever glanced toward the wallflower area, but now he regretted it. The moment he gave his gloved hand to this girl and led her to the dance floor, it was all he could do to keep his balance until they began their waltz.

Her touch was so sensual, he felt her hand not on his but directly on his groin. A hot frisson coursed along his nerve endings, and his whole body shuddered in anticipation. If he felt so much with only the soft touch of her hand on his, what would he feel with her in his arms?

Suddenly realizing where his mind was going, he shook off such outlandish thoughts. He was a bit foxed and couldn’t even remember what Lady Jersey said the girl’s name was during the introduction. He should have skipped that stop at Rothyn’s townhouse, as they’d dipped into bottles of claret before coming here.

Of course, it was turning out amazingly easy to keep his promise to his sister Camie. One dance with a wallflower debutante? Why this beautiful girl lacked dance partners was beyond his understanding. She was as lovely and as rare as an orchid, and her scent intoxicated him even more than the claret.

He had never felt such jumping sensations as he was now feeling while waltzing with her. Her eyes as she looked at him were sparkling blue aquamarines, and the tingling ripple the mere touch of her hand had started now throbbed along his groin so that his hand tightened on hers even as his breeches tightened. He quickly forced his eyes away from her lithe form, for just a quick glance at her curves unhinged him.

They swayed around the vast ballroom, and the lights from a thousand candles and the twirling couples confused him. The lovely girl in his arms became three identical girls who twirled round and round like the racing dials of a mad clock. He heard the waning notes of the waltz as it was coming to its end and felt so dizzy that, had he not held her, he would have lost his balance. He looked into the girl’s beautiful eyes and his gaze drifted downward. Her breasts, the tops of them peeking alluringly from her filmy gown, were so fetching that he wondered when he had ever seen a better pair. There was a small dark mole on her left breast, and a tiny rosebud by it, and so compelling was the tiny beauty mark that he was hypnotized.

The music had stopped. He looked into the girl’s lovely blue eyes and wondered why they were wide with alarm, and her voice was loud and clear in the silence that followed the conclusion of the waltz.

Her hand on his shoulder slipped away as she fell to the floor, her crumpling body settling softly on his feet. Sebastian leaned down toward her prone body.

After a few seconds, the girl opened her eyes. A crowd had rushed forward, and there was a large circle of people around her and Sebastian, three or four deep, looking down with concern. And silence, as everyone just stared.

The girl was helped up by two gentlemen while Lord Corville continued to stare, speechless.

Lady Jersey broke the silence. “What happened to you, my dear?”

A twittering of exclamations rose like a deafening wave, and then sudden silence fell again as the crowd waited in suspense for the girl’s reply.

The girl spoke slowly but clearly, so that everyone heard her words. She looked directly into Lord Corville’s eyes and said, “Lord Corville touched me inappropriately.”

Gloria Gay has lived in San Diego, California the greater part of her life, where she worked as a legal secretary for twenty-five years and as a stringer for a local newspaper. Her heart, though, has always been with art and literature and it was one of the happiest days of her life when she wrote her first book.

She lives with her husband, Enrique, an architect, in San Diego, California, and couldn’t be happier that their children and grand-children live nearby.

Here’s where you can find Gloria on the internet…