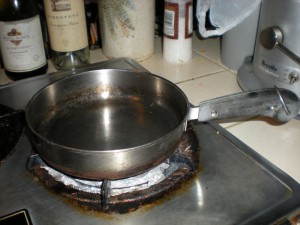 It’s taken me almost 40 years to learn how to make the best scrambled eggs. That ubiquitous breakfast food, the food that most tender tummies can handle, the very first comfort food I remember shouldn’t be so difficult to make.

In my 20s, I went through phases of adding – milk, heavy cream, sour cream, cream cheese. I tried them one at a time, but none of these really made the eggs taste better. So then I thought, it must be the pan I’m using – and promptly absconded with the small copper-bottomed skillet that my mom used to use. Nope. Not the flavor I was looking for, sad to say. In my teens, I spent one memorable Spring Vacation at a friend’s beach house in Laguna Beach while my parents were in Oregon, and my friend’s older really cute brother made us scrambled eggs and he put everything in them. Cut up pieces of salami, cheese, onions, bell pepper, mushrooms, worcestershire sauce, and a little bit of mustard were stirred into a whole dozen eggs before they ever hit the hot, sizzling pan. That is still my second favorite way to have scrambled eggs.

In our first house, my husband found a small skillet in the dumpster behind our condo complex, a perfectly good pan that looked like it would be perfect for omelets. So for years, I made my eggs in that pan, and it served. And slowly, I forgot about my quest for the perfect scrambled eggs. Then, this year I was talking with one of the geologists in my office about cooking, and he said to me, you know the secret to good scrambled eggs? My whole body sprang to alertness, like a hound dog on a scent. I begged him to tell me.

Fat. A good solid pat of butter or tablespoon of olive oil in the bottom of the pan, melted over high heat. Then once the eggs go in, cook them as fast as you can. The less time on the heat, the better.

I took his words to heart and went back to looking for the perfect scrambled eggs. But it wasn’t until, in desperation, I ended up using a cast-iron skillet about six inches across that I got closer to perfection. And once I just kept stirring the egg, dragging the fork through it again and again and never lifting that fork from the pan, that I got it even closer. Small cast-iron skillet with bits of breakfast egg still inside. Added to the kitchen late 1990’s, during our camping/cast iron love affair.

The last bit that sent the eggs to perfection? Taking them off the heat when they were still just a little bit shiny. I’d been so used to cooking them until they were dull that it never occurred to me that I was over-cooking them. The first time I served the eggs that way, my oldest son and I had an epiphany over them.

“Oh yeah,” I answered back. (Our epiphanies aren’t very eloquent.)

I discovered how to make the perfect scrambled eggs…and it only took me 40 years to do so.  The lesson to be learned? In the words of Winston Churchill…”nevah, nevah, nevah give up”.

It skulked in a high cupboard for decades, in a cream and black-striped box that used to hold a nice women’s coat, from back in the day when women’s coats used to come in nice big boxes. Mom had first brought it out to show me when I was six or seven, then reverently packed it away again. I forgot about it – marriage was in the far mists of my future.

I saw it again after I got engaged, and Mom and I talked about my wedding dress. I tried hers on, to make her feel useful (I was such a brat). It was pretty, but at the time a bit too old fashioned for me – stiff satin with a square neck and 3/4 length sleeves. In my defense, I was a very young bride-to-be – only 19, and with no concept of fashion outside of my pointe shoes and tights. In retrospect, I’d have looked killer in that dress after a fitting or two.

Time marched on. I had my wedding (during that awkward year, 1980 – slap between the hippy beach weddings of the 70’s and just prior to the huge, lavish, DYNASTY-type affairs of the mid-80’s) and a lovely brief honeymoon, but I didn’t wear Mom’s dress. Instead, it languished in its cupboard. The delicate headdress for the veil slowly turned yellow with age, and the heavy linen underskirt grew just a tiny bit brittle. They were in their own box, one that used to hold a blanket. The dress, like the boxes, was from the early 1950’s.

Decades passed. I had two children and many different careers, and only thought of Mom’s wedding dress when I saw my parents’ wedding picture. Then Mom died in 2007. After some time, we boxed up her clothes, divided up her jewelry, tossed out her makeup. But the wedding dress still waited in the high cupboard in the hallway, forgotten and much too high up for an old man and  woman to worry about what was actually in that cupboard.

I didn’t think about my Mom’s dress again until one day this spring, when I visited my Dad. His roommate and caregiver had been doing an unusually thorough spring cleaning, and had found the boxes in their place in the hallway cupboard. Dad proudly gave them to me. I was at a loss. I had two young men at home, and not a daughter (or prospective daughter-in-law) in sight. But it was important for him to give them to me.

So I took the boxes home, thinking perhaps a successful costumer I know would like the dress. But somehow, the boxes stayed with me. First in the back of my car for weeks. Then they moved into the house, and in the heat of summer took up residence in front of my cold fireplace. Magazines and guitar picks and sheet music eventually got piled up on the boxes, and they were obscured – we became unsure about what was sitting there on the hearth.

Time passed and autumn approached. This past week, a fire was asked for, which meant the dress was unearthed from its resting place on the hearth – this time, to be moved to the end of the couch. As the hubby prepped the fireplace, I took the dress out, admired the length of the train, the stiffness of the satin, the cut of the neckline. I didn’t bother to hold it against me, as the waist was impossibly tiny for my now-middle-aged figure; and I knew finally a deep reluctance to part with it.

“Perhaps my niece Sara would appreciate it. She has two girls,” I offered. My husband gave a noncommittal grunt. Perhaps Sara would want it. It would at least stay in the family that way.

But I didn’t contact her. I know the dress deserves better. I know there are places that will clean and then preserve the dress in a vacuum-sealed bag (which is how my wedding dress is packed – it hides under my bed). I know some costumer would probably drool over this dress.

As the last bit of my mother’s youth, though, and as I look at my own long-gone youth in the rear-view mirror, my mother’s wedding dress has become a symbol of all her love, hopes, dreams, wishes and desires.

I am never sentimental about my mother; but I find I just can’t part with it. So for now, and my guess is until it becomes imperative at Christmas, the boxes containing my mother’s wedding dress, underskirt and veil will remain on the edge of my couch, making her once again a part of my life.

My mother was the Holiday Ho while I grew up. Not that I mean that in a bad way! She was always there with valentines and candy, green cupcakes at St. Paddy’s day, Easter baskets, amazing 4th of July desserts, Halloween treats, Thanksgiving feasts, and the best Christmas presents. The thing is, she was ALWAYS THERE for every single holiday.

Me? Not so much. Oh, I show my love. I remembered yesterday to buy the valentine cookies at the grocery store. I was stumbling around at 6:00am, looking for coffee beans because I had a ton of pages to edit still and needed COFFEE. The valentine cookies were a side benefit. However, they did the trick this morning – I put one in a baggie for my 17 y/o son, and two in a baggie for his girlfriend. He grinned at me – I’m sure he completely forgot Valentine’s Day. It’s his first girlfriend – if she can’t train him, then she’ll at least get a couple of heart shaped cookies.

I will have you know that I did make the evening meal special. Don’t laugh, I did!  I made my favorite turkey with fresh sage meatloaf, shaped into individual heart-shaped servings. Add a terrific cider-onion gravy and voila, love (and dinner) from the heart. Hand-dipped chocolate strawberries are for dessert.

As I’ve been writing this, though, the smoke alarm has gone off three times because of the meatloaf; the potatoes won’t mash right; and the broccoli looks funny.