by Christine | My Garden

We’ve been planting for a few weeks now. Just added some zucchini, lemon cucumbers, more tomatoes, and some pumpkin seedlings that my dad gave me. Had to zap the zucchini and the cucumbers with organic bug spray (sounds weird, right?); hoping it works because I’m tired of my veggies getting eaten.

But before I show you the garden, here is my bulb bed – very happy with how it turned out! The iris area the newest up. The daffodils are gone, as are the tulips; the freesia (red, in the foreground) seem to hang around the longest, and are definitely the most fragrant. The hubs snuck some dainty tulip bulbs into my bed…pretty, isn’t it? See the baby artichoke, right below the bigger one? Yeah. We’ve got nine artichoke plants. Nine. That’s a lot of artichokes…

Below are the pumpkin plants my dad grew from seed. Not giant pumpkins, just regular ones – it’s gonna be interesting to see if we actually get some pumpkins this year! When they start vining, we’ll train the vines out into the yard. Potatoes are the easiest thing to grow. Once a potato in your pantry (or fridge, or wherever) starts budding, cut it up so each bud gets a chunk of potato, and toss them in the ground, bud side facing up. I planted these about a month ago.

Here’s a mixed bed that we planted last fall – kale to the left (the insects leave the kale alone), boysenberry in the back (though Tom tried to dig that out, it’s hard to dig berries out all the way), and beets in the front. Almost time to pull the beets, the berries haven’t started flowering yet, and I’m cooking with the kale right now. So, that’s the highlight of the garden. What do you think?

I love your comments! If you like the blog, I’d love to have you follow me (because that way, I’ll be much more disciplined about putting blogs up). 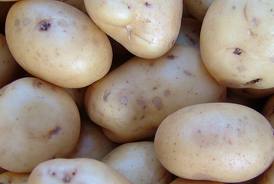