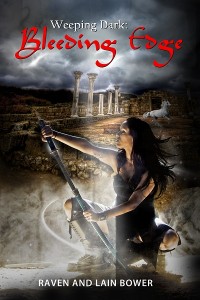 Today I’m excited to introduce you to Raven Bower, another writer pal of mine. Settle in and enjoy the interview!

CA: What made you decide to write a novel?
RB: The characters were tormenting me! Novels are a thing that need to be written, a drive that won’t relent until the finished product is complete. They’re nefarious, characters that is, and dead set on getting their way.

CA: Why fantasy?
RB: I write in several genres – fantasy, horror and urban fantasy. These were easy choices for me because I’m enthralled by things that lurk in the dark, creatures that roam the stygian depths of our imagination.

CA: Ooh, me too! Love the dark. How many books/short stories do you have planned for this series?
RB: The Weeping Dark will have between 6-9 books, depending on how the series plays out.

CA: Very  cool! So, tell me. Where would you live, if you could live anywhere in the world?
RB: Upon the shores of the mighty Lake Superior. She’s beautiful, mysterious, deadly. Though, the thought of enduring so much cold is a bit daunting.

CA: I’d like to visit Lake Superior, but I wouldn’t want to live there. Too cold for me, Brrr! Name 3 simple joys in your life.
RB: 1. My family – husband Lain, kids and furries.
2. Coffee! And tea. Earl grey, hot
3. My sacred pool aka whirlpool that we installed. We did this Egyptian theme in the master bath. Soaking in there – hot and steaming – with books, paper and pen…ah yes. It’s been the birth place of many diabolical plots and characters.

CA: I am SO envious of your Egyptian spa! Do you take reservations? LOL…If you could have dinner with any person, living or dead or fictional, who would it be and where would you go to eat?
RB: Let’s see, place to eat is easy – depends on my mood at the time! Lol  Right now I’d say Japanese, somewhere with good sushi. Then again, Italian has its appeal – tiramisu! Ahem. Anyway. Let’s see. Who to dine with. That’s harder as there are so many interesting people out there – past, present and fictional. Top among my list of present day people would be actor Patrick Stewart. Among those of the past (deceased) would be Aleister Crowley – he’d be quite an interesting psychological study. Fictional…hm…I’d have to say Deucalion from Dean Koontz’s Frankenstein series.

CA: Aleister Crowley, huh? I’d like to be in on that. As long as I have a really strong guy with me. Crowley kind of gives me the creeps. But back to the interview! If you could give just one piece of advice to a writer starting out, what would it be?
RB: There are two books I believe all writers ought to read at least once and they’re especially important for new writers. ‘Finding Your Voice’ and ‘Hooked’ in that order, both are by Les Edgerton.

CA: I’ll have to check those books out. What do you do when you’re not writing? Do you have a Day Job?
RB: I do assorted things, really depends on my mood and my current hobby. Right now it’s fish – researching them, learning aquascaping and creating dazzling tanks filled with scaley friends.

My Day Job is working as director of Hydra Games, a new arm of Hydra Publications – we launch our first products this April! Basically it involves combining the talents of our wonderful writers, brilliant artists, Rules Gurus (we use the Pathfinder Roleplaying Game system, so we need to ensure stats are all kosher) and editors to create worlds, modules, guidebooks and novels.

CA: I have a couple of sons who are very into designing computer game worlds! I should hook you up with them. Just sayin’. Name one thing your fans would be surprised to learn about you.
RB: I like coconuts. Really. The flavor and fluffiness of shredded coconut, especially when covered in chocolate. Dark chocolate – because you know not all chocolates are created equal.

CA: Is there anything else you’d like to talk about?
RB: We could keep talking about chocolate! What kind do you like?

CA: I am a huge fan of dark chocolate. And Decadent Hot Chocolate! But before we get sidetracked, let’s take a look at your new release! When a rash of brutal murders target the most defenseless of her people, spunky captain Shayla Dormyr is determined to bring the culprits to justice. Defying the command of the Prima Canticle, who claim jurisdiction over the ritually slain children, Shayla embarks on a rebellious mission that could cost her rank and freedom.

When she unwittingly exposes a Blood Rune to her prime suspect, the troublesome sell-sword Daibryn, it unleashes arcane consequences that renders them vulnerable to an ambitious and cruel Blood Mage.

Shayla and Daibryn embark on an adventure that will take them to worlds far larger than they ever imagined where love, hate and mystery put their souls to the test.

The book sounds fantastic! Click on this Weeping Dark for the link. You can find Raven at http://www.ravenbower.com/.

Raven and I LOVE comments! So…what’s YOUR favorite type of chocolate? lol!