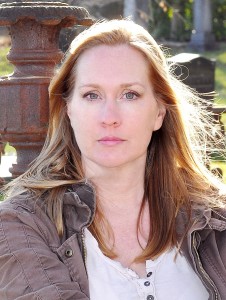 Speak of the Devil by Shawna Romkey

Today we’re welcoming in author Shawny Romkey with her YA paranormal romance novel, Speak of the Devil. I, for one, can’t WAIT to read this book! Let’s find out a little about Shawna before we check out her book, shall we?

Shawna grew up in around farms in the heart of Missouri but went to the University of Kansas, was raised in the US but now lives on the ocean in Nova Scotia with her husband, two sons, two rescue dogs and one overgrown puppy from hell. She’s a non-conformist who follows her heart.

She has her BA in creative writing from the University of Kansas where one of her plays was chosen by her creative writing professor to be produced locally, and two of her short stories were published in a university creative arts handbook.  She earned her MA in English from Central Missouri State University where she wrote a novel as her thesis.

She’s taught English at the university and secondary levels for close to twenty years and can’t quite fathom how all of her students have grown up, yet she’s managed to stay the same.  She’s a huge geek and fan of Xena, Buffy and all kick ass women, and loves to write stories that have strong female characters.

Now for the Cover, the Blurb, and the Excerpt! What happens when falling in love and falling from grace collide?

After dying in a car accident with her two best friends, Lily miraculously awakens to grief and guilt. She escapes to her dad’s to come to terms with the event and meets some people at her new school who seem all too eager to help her heal. Sliding deeper into sorrow and trying to fight her feelings for two of them, she finds out who…what they really are and that they are falling too.

Can she find the strength to move on from the past, reconcile her feelings for Luc, find a way to stop a divine war with fallen angels, and still pass the eleventh grade?

EXCERPT:
Rain fell, not uncommon for late spring in Missouri. “If you don’t like the weather here,” my grandfather would say, “wait five minutes.” Of course, I’d visited distant relatives in Maine once before, and they said the same thing.

Julie fumbled with the wipers while I pulled the sun visor down to check my face in its little rectangular mirror, even though I’d only left my vanity like five minutes ago. The lights on either side lit up the interior of the car. I reached into my tiny party purse to find my lip gloss, which was easy to locate since I’d only packed the essentials in my bag: phone, some cash, and make-up. As I glanced at myself, I saw Mike in the reflection, smiling at me from the back seat. I stuck my tongue out at him, making him laugh, and put on the lip-gloss, fully aware of how flirty I acted.

The windshield wipers couldn’t keep up with the sudden downpour. The pitter-patter turned to thumping. Hail came down in gumball-sized pellets. “Damn.” Julie jerked the steering wheel to keep The Whale off the curb.

“Slow down, Jules.” Mike gripped Julie’s headrest. “We can pull over until it passes.”

“Yeah.” She squinted to see the road before her.

I pressed my lips together to smooth out the gloss. “Damn is right. I didn’t bring a jacket.”

The Whale swerved to the right crunching along the gravel on the side of the road. I braced myself in my seat. Julie leaned up to the steering wheel and peered over it as my grandmother sometimes did when she drove. I squinted because of the stupid light up visor mirror. I slammed it shut, but Julie panicked and over corrected, pulling The Whale to the left and careening over the yellow dotted line in the middle of the street.

Time slowed and ticked out in heartbeats.

Julie cringed, her hands moving up to shield her face. Her head turned away from the highway.

Mike reached protectively from the back seat.

The headlights illuminated the rail of the overpass.

The car hit the rail on the opposite side of the road with a hard thud.

Crap. We’re going over the bridge.

The Whale’s nose pointed down toward the water.

A jolt forward and my forehead slammed into the dashboard.

The Whale flipped in the air. I’m upside down.

Did my mom say good-bye when I left?

Cold water rushed into the car.

My heart quickened. It pounded. The Whale leaned on its side under the surface of the water which rushed in fast, and I couldn’t see a damn thing.

Calm, stay calm. Don’t panic. They say when you’re drowning not to panic because you use up your air faster.
Dammit, am I drowning?

I tried to get myself upright and jerked out of my seatbelt. Luckily, it gave way. I fought the latch to open the door facing up, but the pressure of the water from Black Water River held it closed, trapping me inside.

Jesus. I know this river. It’s more of a creek. It can’t be more than fifteen feet across and ten feet deep. I pushed at the door. Opening my mouth to scream, I swallowed water.

I couldn’t see or hear Julie or Mike. My watch ticked. Or was it my heart beating?

The dreams came. Like a good sleep you don’t want to wake up from. I felt heavy and floaty. I wore this long white gauzy gown and the wind blew my dress and my hair like in some feminine hygiene commercial. I could breathe slowly and deeply. Completely relaxed and at peace, but I was alone.

I floated along in a white space for a while. Drifting. Breathing. Relaxing. Had I gone to a spa? After an immeasurable amount of time, others appeared. They wore white clothing, too, and they floated like me, reaching out. They opened their arms as if to welcome me to them.

I stopped and frowned. I heard no sound, and I didn’t know who these white floaty people were or why they welcomed me. They smiled, genuinely happy, and held their arms out to me. I panicked.

Where’s my mom? My family? Wait, Mike and Julie were just with me, where are they? Are those wings?

I noticed the others floating with me had white feathery wings.

“Lily,” one of them called out.

WOW! What an excerpt – I know Shawna’s going to be around today, so if you have any questions, let her have ’em in the comments! So, now that I’ve recovered from camping up in Big Sur…the Workshop I attended was presented by the Andrea Brown Literary Agency, and it was a workshop, not a conference/convention. Including staff, we totaled 110; there was roughly 1 pro for every 5 attendees, not a bad ratio.

The weekend was for writers of picture books, chap books, middle grade books, and YA. It was not cheap – at $720 for two half-days and one full day, not cheap at all – but probably the most valuable weekend I’ve spent.

Unless you paid the single supplement, you were issued a roommate and I got lucky with Karen Akins. She’s a sweet Arkansas girl who writes both picture books and YA time travel books. We really hit it off and the second night, I kept her up way late chatting. But the roommate thing was fabulous!

The main thrust of the weekend were crit groups, two separate ones. We were to come prepared, with copies of our work, which I did. We read aloud, received feedback from the group plus the group leader (I got lucky and had two agents as group leaders), and had a chance to rewrite before taking it back to the group a second time. Two crit groups, four crit sessions total. Invaluable. Not to mention, a one on one for ten  minutes with an industry professional…that alone totally made my trip.

Some may think they’re beyond it – not needing strangers to crit their work – but I welcome every opportunity to learn, especially from people who aren’t invested in me and could care less how well I do. The feedback I got has been the most valuable on this book so far. Lots of changes need to be made, but that’s okay – it gives me somewhere to take this book so I’m thrilled.

Surprisingly, the groups meshed quickly. Our leaders were firm, fair, and spot on when targeting trouble spots. All the staff were approachable – they wanted us to talk to them, to ask them questions, and considering these were agents and editors for the most part, it was a wonderful sense of camaraderie that they fostered, made possible by the intimate nature of the group.

If you write for the YA market or younger, if you’re stalled and don’t know which way to go, if you’ve got that book that just isn’t exciting interest and you don’t know why – do yourself a favor. Save your money and go to the Big Sur Writer’s workshop. They hold it twice a year – the first weekend in December, and the first weekend in March – and at $720, all-inclusive (lodgings, meals, workshop fee), it’s totally worth the price.