A Mermaid and a Tribred walk into a bar… 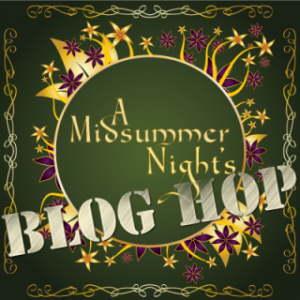 Welcome to the Midsummer Night’s Blog Hop! Several authors have gotten together to bring you interviews between our characters. Today I’m happy to present Gregor Caine, of my novel DEMON HUNT,  who has asked some probing questions of Circe, the heroine of TIDAL WHISPERS by Claire Gillian. One lucky commenter today will win an eCopy of Tidal Whispers, and below the interview is the list of all the blogs taking part in the hop. Enjoy!

Gregor smiles at the pretty woman sitting across from him at the Starbucks. “So, you’re a Siren.  When you’re in the water, what do you wear?” He waggles his eyebrows.

Circe pulls out pad of paper and pen and begins writing.  I can’t speak but I can use sign language or write on paper to communicate with humans…so unless you advise otherwise, I’ll continue to write out my responses.

To answer your first question, yes, I’m a Siren. Circe smirks at Gregor. Humans are always so interested in clothing. I only wear it when on land. I shuck it all off before I enter the water so I can move faster and not look like drowned rat in my wet clothing if I’m spotted on any of my favorite perches. My skin in the sunlight, or any form of manmade light, has a reflective quality that gives a mirage-like illusion of clothing. To most observers, I appear to be wearing a long, form-fitting gown of turquoise and navy and aqua with flecks of silver and gold.

Gregor, reading what she’s written, nods. “My lady, Serra, has lovely, pearlescent skin – I can understand the mirage-illusion. Okay, so tell me. Why, specifically, do you sink fishing ships? People have to eat, right? I mean, why not go sink pirate ships, or something useful?”

Circe rolls her eyes and writes. This is my job, or was. I never cared what kind of ship they were. I sank pleasure crafts too, but in Alaska, there are a lot more fishing vessels about so that is mostly what I end up luring.

I have sunk many a pirate ship in my day. I just haven’t run across too many in Alaska, unfortunately. Pirate ships were always fun. “Useful” is in the eye of the beholder, of course. To me, all ships are intruders to be claimed for my shipwreck quota. I care not for their humanly purpose. My boss is ruthless and does not tolerate slackers. I don’t have the luxury of being picky. I have always taken any that heard my song, never spared any, which is why Otis’s getting away galled me so much…at first.

Gregor’s eyebrows rise. “Go, Otis! The human who got away. Okay, so you’re not sinking ships right now. Did you lose the use of your voice? or just your self confidence?”

Circe writes. My voice is gone now. Totally. Poseidon could give it back if he chose but he’s still ticked off at me. Rumor has it he misses my expertise and has been reconsidering, but I’m not so sure being on his radar is a good thing or that he is trustworthy. The Olympic gods are not known for their integrity. I was once the best siren in the Pacific, but Poseidon wanted more from me than just someone to feed Davy Jones’ locker, if you get my drift. I don’t mind being voiceless, and I am not going to mess with a good thing.

Gregor nods. “That makes sense. So, if I were to hear you sing, would I go crazy, drown myself, or fall in love with you? Or all three?”

Circe stretches, and Gregor enjoys watching her move. She bends to write again. I’ve been told you’re most likely to go a little crazy with desire to move toward the source of the sound. An aural madness, if you will. If you were in a boat, I would only need to draw you close enough for the rocks I sit upon to do the rest. If you were swimming, however, you’d drown in your frenzy to get close to me. I can throw you off course if I like so you’d eventually swim to exhaustion and drown trying to get at me. That’s only happened once that I can remember and it was not pleasant. I prefer shipwrecking. It’s less personal, more business.

Circe sighs. Yes, my speaking voice and my singing voice have…or had…the same impact on hearing humans—a frantic desire to get closer to the source of the sound. Some of the tones I use are audible, some are sub-sonic while others are supersonic. My frequency is extremely wide. Don’t ask me how many octaves. Suffice to say, Mariah Carey couldn’t even come close to competing. Both dogs and marine life can hear me if I use a pitch in their frequencies.

Gregor smiles. “Interesting comparison. I really like Mariah Carey, myself. Don’t you ever get lonely, sitting on a rock out in the ocean?”

Circe nods emphatically. Gracious yes! Sirens in the Alaskan waters are pretty rare, one reason why my quota is so high. The elements are harsh enough on their own, making my job easier, but very lonely. That said, I’ve been part of a siren co-op before. We were a trio, called ourselves Roxanne’s Red Light, but that was in the Aegean Sea where sirens are practically tripping over each other.

Gregor grins. “Red Light? Nice. What do you tend to wear on land? Are you a dresses kind of gal, or a jeans and t-shirt person?”

Circe frowns. You do have an inordinate interest in my clothing! If you must know, I wear clothing that is quick and easy to remove but also allows me to blend in and not attract attention. I prefer the faster drying fabrics so I lean toward floaty dresses, but jeans tend to attract less attention when I’m around larger groups of people.

“Right. Consider my hand slapped.” Gregor grins again. “Is Poseidon really all that scary, or is he a softie?”

Circe’s eyes widen. He’s kind of scary, but he’s also really susceptible to flattery and is generous to his sycophants…so long as they are in favor. Fickle is an apt description for him as well. All the gods, really. You tangle with them at your own peril. She shakes a finger at him.

“No problems. I’m happy to leave Poseidon alone. Tell me, if you grew up in the ocean, where did you learn sign language?”

Circe smiles finally, which dazzles Gregor a bit. I’m actually amphibious. I spend time on both land and in the ocean. Many years ago, a very famous siren named Helen learned sign language by spying on a group of deaf children who had made a field trip to the shore while she happened to be on furlough. One of the children left behind a primer on sign language that Helen found and kept. She taught it to her friends who in turn taught others. It really caught on because it’s a discreet means of interacting with humans and each other without revealing our true natures. My mother taught me as I will one day teach any daughter I may have.

Gregor leans forward, his interest caught. “That’s fascinating. Amphibious. What is it about dry land that draws you to it, and why for all that’s sacred did you choose Homer, Alaska? What’s wrong with Los Angeles?”

Circe’s eyes twinkle as she responds. I do love the occasional Starbucks and that brown, bubbly stuff called Coca-Cola. I also like to get away from my aquatic friends, who I love dearly but they tend to swim in large circles and gossip endlessly. I like my privacy. My best friend is a selkie, and she invites me a few times a year to her cabin in Friday Harbor near Seattle. Most of my closest friends are amphibious like me, equally comfortable on land or in water. Until recently, I shied away from humans, but I made an exception for Otis…for business purposes, at least at first. As a whole, humans are much scarier than Poseidon.

As for a place, I didn’t have a choice about Homer, Alaska. Poseidon sent me to Homer to punish me for spurning his advances. I used to live near Greece. However, in the frigid waters I achieved great success—the men here adore women and fishing and crabbing are huge industries for the area. Foiled yet again, when Poseidon discovered one measly ship had eluded me, he was all over it. Yet I can’t regret that Otis survived.

Gregor kisses Circe’s hand gallantly. “Thank you so much for spending time with me. It’s nice for us otherworldly types to get to know one another.” Gregor turns to talk to the readers. “So all of you out there, put your name and email address in the comments. One random commenter will be picked to win a copy of TIDAL WHISPERS, and you can read all about Otis and Circe’s grand adventure. Trust me, it’s worth the read!” So there you have it! Below is a listing of all the blogs in this hop, and every one consists of character interviews. Enjoy!