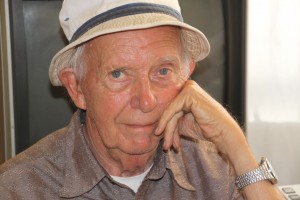 Okay, so. On Sunday, as my last post here said, Tom (the hubs) and I went to see my Daddy and to work in his garden. Well, Tom worked in the garden. I interviewed my dad. See, there’s a lot I never knew/don’t remember/mom never told me. And now mom is gone (6 years in April), so she can’t talk to me.

So I’m interviewing my Dad, Chet Cunningham, every time I go down to see him now. About everything I can think of/dare to ask (and there are some areas I haven’t even considered broaching yet, but I’ll get there). Here it is (and here’s a picture). Me: So, Daddy. How did you become a writer?

Chet Cunningham: The stock answer is in high school, I had an essay test in English on a book I don’t remember now. I wasn’t too sure of the answer, so I wrote down everything I could remember. Got an A on the paper, and an A in the class. And I said, hey, this writing thing is easy.

Me: I had to laugh at this, because I learned in the 8th grade (history I think) that I could ACE essay tests. Who knew that’s where I got it from?

Me: What happened next?

CC: I signed up as a journalist major with Pacific University in Forest Grove, Oregon. But I didn’t pass the English test, so I got put into bonehead English. And the professor in charge of Journalism said, you can’t be a journalism major if you’re in bonehead English.  I said to him, by the way, I’ve sold a couple of articles to the Portland Journal. He said to me, selling a couple articles doesn’t make you a journalist.

Now, the emphasis in the classes I was taking was toward working on a newspaper, but I wanted to write for magazines.

Me: What was your first writing job?

CC: A buddy of mine, Hans Running and I, had a photography business during college. A way to make some extra money. He saw that the Central Oregonian was looking for a reporter, I applied, and I got the job. I graduated, then two months later, I got drafted.

Me: That would be for the Korean War, right?

CC: Right. After I came home, I applied to Columbia University to the Master’s Program in Journalism.

CC: Fast and furious. One of my professors told all us new kids to be sure go do the tourist stuff. Go to the Empire State Building, the Statue of Liberty, the museums, see a play or two or three on Broadway, walk in Central Park. Do it while you’re here, because you  may never get back. So Rosie and I did all the touristy things.

It wasn’t until later that I found out the college was reaching out to as many states as possible for students, and I was the only student who applied from Oregon. Columbia is also where I learned to never, never, never use the word “very”. It’s the weakest word in the English language.

Me: I remember you telling me that years ago. Okay, let’s skip ahead. You wanted to be a writer, and you wrote. What kind of writers’ books did you read? Any craft books?

Me: *totally shocked* No?

CC: No. I wasn’t brought up to read. That wasn’t how I learned the best. So I just wrote.

Me: But you wrote westerns. Your first western – you sold Bushwhackers in the Circle K in 1968.

CC: I got a grand total of $300 for it, too. I decided to learn how to write westerns – my dad by that time was reading lots of Louis L’Amour. So I read all I could, and marked them up, and wrote the book. And sold it. The editor, he said, “Well, it’s not the best book I’ve read, but I’ll buy it.”

So there you have it. My dad, Chet Cunningham, who’s had over 300 novels published not to mention all his non-fiction books, has never read a writing craft book. This was so illuminating to me. Why?

I’ve read many books on writing. The best ones, in my opinion, don’t tell you what to do, but just keep encouraging you to do it. The War of Art by Pressfield, for instance, or On Writing by Stephen King.

I’ve read books, taken how-to classes, learned different story structures, and all of them seem to tie me up into over-writing paralysis. For instance, I can’t even begin to use Donald Maas’ “Writing The Breakout Novel” way to write. It tangles me up in knots and I can’t do it. It’s not for me. It might work well for you, and that’s terrific.

I wrote a synopsis based on Blake Snyder’s Save The Cat, and guess what? TOO MUCH PLOT. Okay, maybe that one will work for a single title, but not a shorter novel. And then I remembered something else my dad taught me, years ago when I had just begun to write. I asked him how he structured his synopses.

He said, just tell the story in first person, present tense on the page. Don’t use too many pages, don’t tell too many little details.

The hands that wrote the books.

Did I mention he’s got arthritis?

Do you have any books on writing that really worked for you? How about ways of plotting? Please share!