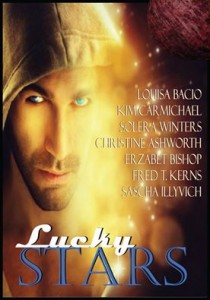 As you may or may not know, I had the privilege of being a part of the Lucky Stars Box Set with some amazing authors – namely Louisa Bacio, Kim Carmichael, Solera Winters, Erzabet Bishop, Fred T. Kerns, and Sascha Illyvich. That box set came out in March. Then, of course, we started rehearsals for CASSANDRA CRIES, a play I wrote, which will get 4 performances in Hollywood at the last weekend in April, and the first weekend in May. A play. As in, actors on a stage bringing to life a world I have created. My words in their mouths.

This is a different – thing – for me. I am the creator of the play. Everyone else is there because of me. And while it is similar to being an author, in the theater world it has more of an impact on me. It’s intense. It can also be intensely boring (OMG I hate this scene -who wrote this shit? Um…*headdesk*).

It is a different medium, and having people take the characters I created and breathe life into them is somewhat astounding. And addicting. Sigh. But this isn’t the end of the craziness that is my life, my friends. Not a bit of it. Why? Because tomorrow, GUARDED STAR comes out – book 2 in the StarTide Agency series. And right on the heels of that release is the California Dreamin’ Writer’s Conference in Brea, where I’ll be rooming with 3 other people, hugging all my friends old and new, participating in a Lady Jane’s Salon reading of my book, coming right after the fabulous Susan Squires and a couple of people before Christie Craig…plus seeing friends such as Brenda Chin and Michelle Klayman (also my publisher), and the weekend all culminates in a booksigning  on Sunday, March 29, from 2 – 4pm. I’ll be signing that brand new book. Exciting doesn’t begin to describe…

…and underlying it all is a sense of dread. Because too many good things tend to need a balance to them, don’t they?  So I worry about my dad, being so far away from me. I have to trust people my gut doesn’t want to trust, and I have to let my dad run his own life as he sees fit. He’s sharp as a tack and not one to bend easily (I get my stubbornness equally from him and my mother).

But it’s the fear of losing my hearing that has my heart in my throat and a glass of wine in my hand most nights. I know I need to call the doctor and get checked out…it might be nothing. It might be a lot. Just knowing that I might one day become totally deaf…not my worst nightmare, but hell. Makes me wish I’d actually followed through on learning AMESLAN which, according to that link, is an outdated term – and how interesting that American Sign Language and Chinese have a lot in common. Head. Desk. I mean, I know I want to keep learning and keep growing and…sigh. Damn it.  I dealt with losing the hearing in one ear. back in 2010. Really don’t want to have a matching pair of ears that don’t work…even though the hearing loss in ear #2 won’t be for the same reason as the loss in ear #1. I hope.

So, yeah. There’s excitement and dreams coming true and getting to see and hug friends and putting my work up on stage in Hollywood and relationships changing and growing and pedicures to get and … fear.

…and the beat goes on… UPDATE: I don’t know why this didn’t get posted the first time around…anyway, hearing loss is minor to moderate in the good ear. Am waiting to get the referral to see the specialist that helped with my acoustic neuroma surgery…to see what can be done to preserve the hearing I do have.