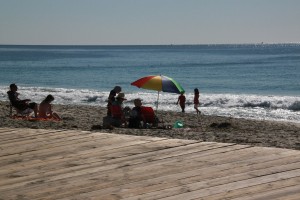 So, the hubby and I were at a restaurant last week, in Santa Monica, on a weeknight. And while it was wonderful to spend some alone time together, we had a ton ‘o fun people watching. Not Santa Monica. This is Laguna Beach, taken by me this past February.

The couple in the booth next to us didn’t seriously come to our attention until, as we were chatting with our waiter, we hear this querulous voice.

“Waiter, is my entree ready? Because we really have to go.”

Our waiter apologized to us, appeased the woman, and disappeared. About 2 minutes later the manager appeared, bearing a steaming hot dish (which looked delish!) to the woman who complained. She complains at once – shrilly – at “all the heavy sauces” (we’re in an Asian Fusion restaurant) and since “nothing suited me, just charge us for what we ate and leave it at that”. The manager, in a calm, low-voiced manner, thanks her and goes off to prepare her check, the steaming dish still in his hand.

She tells her husband, in piercing tones we cannot avoid, “the dishes were all right, tasted good, but the sauces were just so thick.” Um, seriousWhen they get up to leave, her husband has an embarrassed air about him and she has that discontented look about her eyes and mouth that tell me nothing, ever, will be good enough for her to accept. It makes me pity her husband. They were close in age to me and hubby, but I really just wanted to smack her.

After they are well gone, our waiter comes back. Apparently that couple is the talk of the staff – she had sent back four – FOUR – kobe beef dishes. And didn’t pay for a single one. That’s beef down the drain since it hit a customer’s table. That made me want to doubly smack that woman. And here’s a flower from my back yard, around Mother’s Day. Epithilium.

A much more humorous (and oddly sad) attraction at dinner was the couple at the bar. He was in his early 50’s; thick, curly gray hair, slightly portly but well within attractive, nice gray suit. She was blonde, tanned, young – mid-late 20’s – in a figure-hugging black strapless dress, shirred front, back and both sides.

We first noticed them because he was fondling her hand, which she had hanging from the back of the bar stool. But her hand was limp – she was not returning his affectionate caresses. For the hour or so we were there, it was an interesting interplay – his eyes would light up, he’d speak, fondle, she’d turn away pick up her drink, turn back, say something.

He was slugging back glasses of red wine. She was sipping what looked like Cosmopolitans. We couldn’t tell if they were conducting a clandestine affair, if they were co-workers, or if she were trying to sell him something (get your mind out of the gutter!).

For awhile, he stood at her side, pressing kisses to her hair, before gazing down into her eyes. He tried to kiss her mouth but she kept ducking him, once even putting her hand over his mouth. He finally did land one, and sat down in triumph. Then she started showing photos to him from her cell phone (which made me think she was selling something) because she was talking non-stop while he was drinking.

I caught a look at her when she went to the ladies’ room. Creamy skin, big tits, smallish waist, big hips all wrapped in a come-get-me package including CFM pumps in a beige that just didn’t go but whatever. The jarring note was the ever-so-slightly pissed off look in her eyes, the tight way she held her mouth.

While she was gone, he ordered new drinks for them. Then when he went to the bathroom? He took his wine with him. Um, REALLY??? People are weird.

Soon after that, she became much more affectionate, leaning her hand on his thigh, touching his face. He chugged his wine down and most of her last drink while she put on more lipstick, then they got up to go. As they walked away, her left hand was in his left hand while his right hand was firmly planted on her ample bottom. What a fascinating peek into other people’s lives…the stories I could make up!

And about our waiter? He’s a new stunt guy in town trying to break into showbiz. We are now Facebook friends, and will help him as much as we can with our limited stunt people knowledge, lol.

We left the restaurant thoroughly entertained and very happy to be together. When was the last time you did some people watching?